Little Girl in the Green Shirt

I said "yes" to India about a year and half before the trip finally happened.  During that time, I began to have recurring dreams about a little Indian girl in a bright green shirt.  Several times in those dreams, she was at my front door motioning me to 'come' with her hands.  Once, after our trip had been postponed, I saw her walking away from me down our sidewalk in the cul de sac.  Yet again, she was in another dream and was in my kitchen.  Same girl.  Same green shirt. Over and over.
I was excited that God was constantly reminding of His plan for me and India.  A simple reminder - that's all my carnal mind allowed me to think.  Little did I know that He was giving me visions of something to come.  He had plans for me and that little girl in real life in India.  Just as He used dreams and visions in the Bible to speak to His people, He was speaking to me.  Wow.  Now, He had to take me across the world, waaaay out of my comfort zone, and humble me for me to see what He was doing.  Through a little girl in a green shirt, He showed me that He cares and He connects the hearts of His children no matter the distance.

I just knew that first day when we walked into the Girls' Home that she would be there.  I had envisioned walking in the room, seeing my precious girl in her green shirt, and creating a forever bond with her.  Neat thought, huh?  Didn't happen.  There were a couple of girls in green, but they weren't her.
Now, please don't think that she was my only focus.  I just thought it would be neat if I met a little girl in a green shirt on my trip. So many amazing things happened that had nothing to do with the girl in my dreams. We went about our day with delight and honor. We took our first tour of a slum and I just knew I'd find her there.  Nope, not there either.  I moved on resigned to the fact that my earlier dreams in the States were just what I had originally thought - simple reminders from God.
We were so excited to go back to the Girls' Home and see our newest BFFs!  All of us - our team & the girls - smiled ear to ear as we greeted each other again with big hugs and laughter.  Then it happened.  It was like a scene from a cheesy movie for me.  The girls were thrilled to introduce us to their 2 new friends.  It was like the parting of the Red Sea as they stepped aside and a Heavenly light shone on the two newest residents of the safe home.  Yep, you guessed it - "my little girl in the green shirt" stood next to her sister staring at these strange Americans.
It was their first day there.  "A" had been given a bright green t-shirt (which ironically said "this is my time-out shirt").  It was her.  Not a doubt in my mind and....I lost it.  He had answered my prayers and given me physical confirmation of my dreams through a beautiful little girl and her sister.   They were very shy at first - you can imagine the fear they must be experiencing during this wild life change.  By the end of our visit that day, they were smiling and laughing.  When we were leaving, I spotted A across the room and I squatted down and held open my arms.  She ran to me with a smile and gave me the biggest hug.  That is so very uncharacteristic of the girls when they first get to the home as they transition and learn to trust.  What a huge blessing He gave me to have that precious moment with her.  That was the last time I was able to go to the home this trip.
That afternoon, I was telling our friend, their leader, this story about my dreams and meeting A.  His eyes were glassy so I asked if he was okay.  He smiled and said, "That's the confirmation I needed."  Huh?  Well, A's mother had been begging for a while for our friends to take her girls.  After a tragic event in the area of the slum where the girls and their mother lived, our friends agreed that the girls needed to be protected and they would do what they could to bring them into the home despite the fact that they were at capacity and logistically couldn't take on any more girls.  Then, the Lord brought it all full circle as we got to meet on her first day in the safe home.
Whew.  Our God is so big and He proved it to me again through a little girl in the green shirt.
Posted by Abby at 8:52 PM 5 comments:

The trip that changed everything...

I could talk for hours about my trip and the things I saw there.  I was so out of my element and He was doing things in me and through me that was so out of my character. He is BIG and He revealed so many things to me.
As I sit here and try to decipher how best to put into words the work going on through KCP (Kingdom Come Partners), I'm at a loss.  Shocking, I know - Abby Rambo Boerger at a loss for words! I'll do my best to give you a peek into this amazing organization and the people who act as the hands and feet of the funding and prayers.  I strongly encourage you checking out the website that Carol Lancaster (my friend, mentor, and founder) has created.  She tells her story about how it all began. www.kcp.org
My version of the long and short of it.....
As I began to get to know Carol a few years ago, it was obvious within minutes that she has a passion for India and the epidemic of human trafficking that happens there.  She and her husband, Ken, have partnered with an AMAZING couple in India who have sacrificed the comforts they could easily have in order to care for "the least of these".  She is a doctor of economics & he has his masters from Oxford who live across the street from biggest slum in Delhi.  KCP has played a key-role (often singlehandedly) in developing a safe home for the girls, developing accommodations for trainings and gatherings, and with our church started a Bible College for developing men into mighty pastors of His Word.
On my recent trip, I was beyond humbled to get to serve alongside Carol and our friends there.  We took supplies for 3,500 kids to enjoy VBS and myself and two partners taught the 28 teachers.  I can't wait to see the pictures and hear the stories when they teach the kiddos!  We had a graduation ceremony for 20 pastors (including one woman!) as they have completed the 2-year training and will be planting churches across India.  One of my favorite times was getting to host a woman's gathering.  Women are not valued or respected there, so it was a privilege to speak life into them, encourage them, serve them, and simply sit at their feet.
The absolute highlight of my trip was visiting the girls' safe home.  Wow.  Just wow.  These girls know way more heartache and darkness than we could ever even fathom.  Because of the strategic efforts of Carol & our team there, these girls have a safe & loving home to live, a top Christian education, clothes, food, and HOPE.  These girls do not have to fear sex slavery anymore.  The stories I have about these girls is heartbreaking, yet encouraging.  Our God is big and He is evident there despite the darkness of world around them.
I am called and am passionate to raise awareness and funding for this foundation.  Getting to experience it in person changed me forever. Thanks for reading - this the only way these girls can be heard.
Keeping the change,
Abby 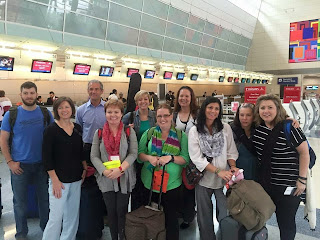 Abby
Born and raised in small-town Texas, it is great to find our home here in Flower Mound. I am blessed to have an amazing husband and the two most amazing girls on the planet.